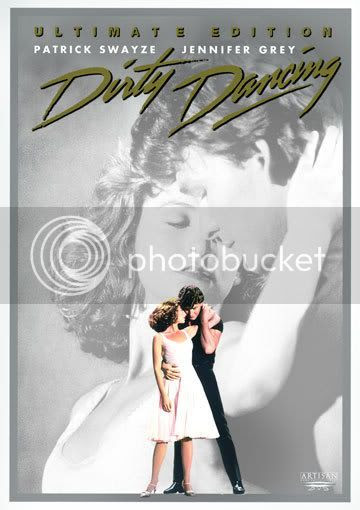 Dirty Dancing is a 1987 romance film. Written by Eleanor Bergstein and directed by Emile Ardolino, the film features Jennifer Grey, Patrick Swayze, Cynthia Rhodes, and Jerry Orbach. The story details the moment of time that a teenaged girl crosses over into womanhood both physically and emotionally, through a relationship with a dance instructor during a family summer vacation. Around a third of the movie involves dancing scenes choreographed by Kenny Ortega (later famous for High School Musical), and the finale has been described as "the most goosebump-inducing dance scene in movie history".

This is probably the bazillionith time I have watched this movie, but it never gets old an I ALWAYS cry at the same spot in the movie (during the song "She's Like The Wind" when Johnny is leaving). I watch this movie a lot when I'm upset, which was the case this time as well. It is kind of a "comfort" movie for me... kind of like spaghetti is a comfort food for me. There are just certain things a girl needs I guess. Some girls go for chocolate... I go for DIRTY DANCING.

Posted by SandDanz at 3:48 PM No comments: 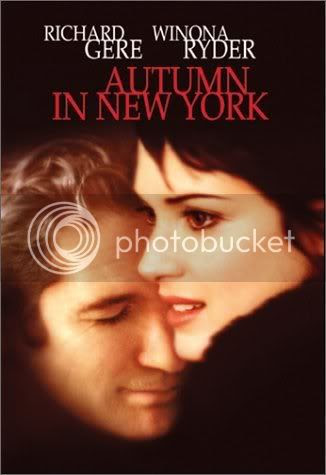 A May-December romance. He's 48, on the cover of New York magazine, an upscale restaurateur, and a womanizer who rejects ideas of love. She's 22, living with her grandmother, artistic, facing a tumor that's life-threatening, which she tells him about the morning after their first night, when he tells her not to expect permanence from him. Will finds Charlotte unprecedented and unpredictable, and experiences feelings of love, but she packs him off when he's casually unfaithful. He's stung, and he's also flummoxed by the appearance of a young woman from his past. Can he convince Charlotte to take him back, and can he help her through her illness and change his irresponsible ways?

Sweet movie, but not quite what I was expecting. Glad I finally watched this as I enjoy most movies that star Winona Ryder and this one was enjoyable... but not one of her best. I doubt I'd watch this one again anytime soon, but it was a bit sad and I found myself crying near the end, though that was only partially due to the movie and partially due to the fact I was having a really bad day.

Posted by SandDanz at 3:47 PM No comments: 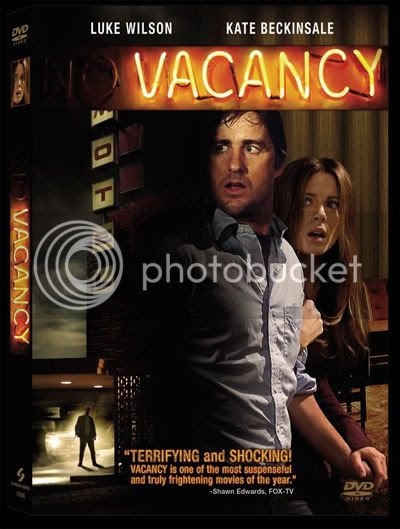 When David (Luke Wilson) and Amy Fox's (Kate Beckinsale) car breaks down in the middle of nowhere, they are forced to spend the night at the only motel around, with only the TV to entertain them... until they discover that the low-budget slasher movies they're watching were all filmed in the very room they're sitting in. With hidden cameras now aimed at them... trapping them in rooms, crawlspaces, underground tunnels... and filming their every move, David and Amy must struggle to get out alive before whomever is watching them can finish their latest masterpiece.

I was sitting on the edge of my seat through most of this wondering if David & Amy were going to make it out alive of not. I can't imagine anyone actually being sick enough to make "snuff films" like the jerk-offs in this film, but I'm sure there are some people like this somewhere out there in the world... or have been in the past anyway. This is one intense film and I highly recommend it to fans of horror and thriller movies.

Posted by SandDanz at 3:39 PM No comments: 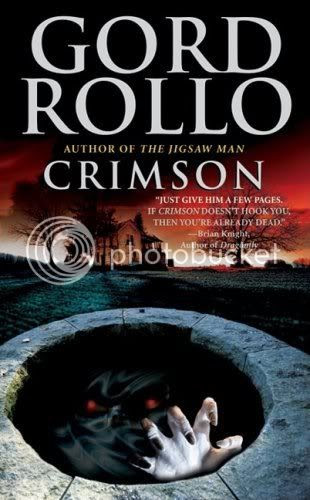 The citizens of the Canadian town of Davinsport, Ontario, are no
strangers to fear. Evil has walked their streets before, leaving in its
wake a legacy of murder, and mad-ness. No one likes to talk about it
anymore, and most people have managed to convince themselves it never
really happened, but secrecy and denial can only hide the truth for so
long. Evil can wait forever. By 1967, what had happened was nothing
more than a legend, a scary story told around roaring campfires. Four
boyhood friends are about to discover the truth, but no one will
believe them. Their parents think the boys?

This is Gord Rollo's second mass market release
(following last year's JIGSAW MAN). Definitely a strong release, yet I
still think JIGSAW MAN is my favorite thus far. CRIMSON was strong
from start to finish, however; and was full of twists and surprises.
In particular there was one scene where the "evil" popped up that I SO
didn't expect it to. It just seemed really unlikely and I was like...
what the f***!?!?!? Rollo is quickly becoming a favorite author of
mine and I'm looking forward to future releases by him.

Gord Rollo's second mass market release is about a small town in Ontario,
Canada where an evil has been lurking for years. Four young boys are
trying to unearth the truth of what happened over 20 years earlier when
a man brutally murdered his family and has since been though of as just
a scary story. While searching out the truth, the boys discovered more
than they bargained for and soon started to realize that maybe the
"evil" hadn't really left their small little town after all...

This book would be a great addition to any library's horror section
as it has quite the "creep" factor going on. The book had lots of
twists and turns in it that kept me wondering how things were going to
end up. Towards the end of the book I was so nervous about how it was
going to end that I think I chewed both of my thumb nails off. Rollo's
work is definitely a nail-biter and very fast-paced! He's a great new
& rising author in the horror genre. 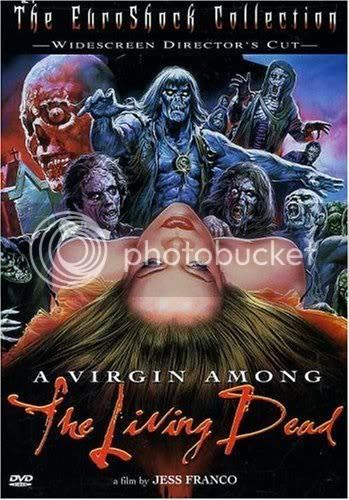 Pretty Christina (Christina von Blanc) encounters ghostly apparitions when she travels to a mansion in Honduras for the reading of her father's will. Thinking that she is going mad, Christina investigates further and discovers some horrible family secrets which could consume her. This witty erotic horror effort from cult director Jesus Franco is a perfect example of the re-editing and butchering of European films, which became common practice in the 1970s. At least 10 different versions exist, some with completely different plots than others. A 1974 re-release contained softcore sexual inserts featuring Marie-France Broquet, Waldemar Wohlfaart, and other performers not present in the original version. In the 1980s, French director Jean Rollin was hired by the Eurocine studio (by far the most common offender in the area of "cut-and-paste filmmaking") to shoot additional scenes. Rollin's footage consists of approximately 15 minutes of gory, uninspired zombie attacks, meant to capitalize on a then-popular subgenre initiated by Lucio Fulci's Zombi 2. Yet another version contained scenes from a Rollin-directed vampire film and was advertised with a picture of Vincent Price, who does not appear in any known version of this film. Further complicating matters is the fact that most of these alternate versions exist in varying lengths, reducing a rather interesting film to an incomprehensible mess. Britt Nichols, Paul Muller, Howard Vernon, and Anne Libert co-star, and Franco appears in a cameo role excised from some prints.

This was a bit better than the last Franco film I watched, Female Vampire, but I still wasn't overly impressed. Definitely more plot to this one however, so more enjoyable in that sense. Franco does have a way of picking attractive females for his movies, I'll give him that at least. Beyond that... I'm not sure how impressed I am overall with his moving making. I'd give him a few more tries I guess, but I really don't know if he'll improve or not.

Posted by SandDanz at 9:55 PM No comments:

Strand's latest novella starts off with his main character, Josh White, getting a bit of a shock... he finds a severed nose sitting on a plate on his dining room table. After contemplating his options, Josh decides on the most logical choice, placing it in a baggie in his freezer to "keep it fresh". (I'm sure that's what any of us would do, right?) Josh's initial decision is followed by a string of events that forces him to make more quick decisions, sometimes life threatening, and many of which include a couple of thugs working for the guy behind the severed nose. Is Josh strong enough to take the thugs down and solve the mystery of the severed nose or will he get killed while trying?

It may only be a novella, but there is a lot packed into this "Nose" (pun fully intended). The Severed Nose is filled with action, torture, and laughs. Strand has yet to disappoint me with one of his books. He is the king of comic horror. I read his books when I want a good gross-out, horror novel, yet I also need a good laugh. His books are always laugh out loud funny, and this one is no different. Adding this title to a collection will put a smile on the face of many horror fans. Highly recommended for public libraries.

(Review also posted on MonsterLibrarian.Com)
Posted by SandDanz at 9:51 PM No comments: I'm on trial for my life. Falsely accused of infecting my human
ex-boyfriend—and killing him to cover up the crime. Infecting a human
is one of three capital offenses recognized by the Pride—along with
murder and disclosure of our existence to a human. I'm two for three. A
goner. Now we've discovered a rogue stray terrorizing the mountainside,
hunting a wild teenage tabbycat. It's up to us to find and stop him
before a human discovers us. With my lover Marc's help, I think I can
protect the vulnerable girl from both the ambitious rogue and the
scheming of the territorial council. If I survive my own trial…

I think this is the strongest book in this series yet! This book definitely seems to be a key book for the series as it shows Faythe becoming stronger and making more decisions for herself as well as for others. She is definitely heading in the direction of one day taking over her father's position in the pride. This book has a little bit of everything as it's a mix of fantasy, horror, romance, comedy, etc... Really looking forward to PREY to come out this July!

My review of Pride on MonsterLibrarian.com:

Third in Vincent's Werecat series, Faythe Saunders is facing challenges more intimidating than ever. You'd think being a werecat is difficult enough, but in this book she is facing the werecat tribunal, on trial for her life as they believe she has committed murder! Not only that... there is a new tabby in town and this tabby is different than any they have ever seen. Faythe is on a mission to help herself and the tabby keep their lives!

Faythe is definitely not a young tabby anymore! Pride shows how much Faythe has grown up by how she takes control of so many situations and makes decisions without waiting for the Alphas to give her the go ahead. She is head strong and definitely heading in the direction of taking over her father's position one day. This book seems to be a "key" book in the series to show what her role will be one day. There is a good mix of paranormal, dark fantasy, and mild horror within this book... as well as a touch of romance and humor so it should fulfill the wants and desires of most readers. I highly recommend it as an addition to any library.

To see the review live, click HERE
Posted by SandDanz at 9:49 AM No comments: